B7. Turks and Caicos

On January 11, 2018 Cindy and I returned to South Side Marina to find Pazzo in excellent shape. We did some laundry and shopping before welcoming Bruce, Brian, and Kelsey Luscombe aboard for a much needed escape from Portland after losing Julie in the middle of December and the subsequent not-so-merry Christmas.

We wasted no time escaping the marina for a short sail to Taylor Bay, just west of Sapodillo Bay. Not much here but better than sitting in a marina. The following day, after a quick shore trip to buy fresh dinghy fuel (after discovering a clogged carburetor), we made our way out Sandbore channel for snorkeling on the fringing reef to the north of the channel. Good visibility, but not much to see. From Sandbore, we continued south to a (another) unfinished marina on West Caicos Island. This marina showed plenty of hurricane damage but included one small dock that was being used by a hurricane clean-up crew. Other than these folks the island is completely abandoned.

We hiked south on a dirt road/path to Lake Katherine in search of Pink Flamingos, reported to live and fish in the lake. While we found plenty of spiders and a number of other “insectos,” we found only one flamingo, with a damaged wing. Cindy and I adventured north to polk around a very large and abandoned Ritz Carlton high-end resort community. We found beautiful marble floors, half-finished fountains, about half of the windows have been installed, 90% of the roofs are complete and then hurricane damaged. Apparently, the project was funded by Lehman Brothers and managed by the Ritz Carlton. In 2008, the project came to an instant halt. Workers dropped their tools mid project and walked away. Since then, we’re told, a wealthy Russian who also owns EPL team Chelsey has purchased the project (and entire island) and plans to finish the development. It’s a beautiful setting with a lovely beach; we hope it comes to fruition.

The following day, Cindy, Bruce, Brian, and Kelsey made another run at flamingos. This time on the back of an ATV chauffeured by Alex, the leader of the hurricane crew. Success! They found many flamingos, but the flock was quite far away without a route to a closer view. At 11:00, we set off on a lumpy beat around Northwest Point and then SE into Turtle Cove, a lovely marina on the north shore of Provo. On our approach to the Turtle Cove entrance, we pulled in a nice 8-10 pound Mahi Mahi – fresh sashimi and fish for dinner!

We spent 3 nights at Turtle cove, relaxing, shopping, eating, and exploring Provo. The Luscombe trio went bone-fishing one day while Cindy and I explored all of Turtle Cove by kayak. Thursday nights are “Fish Fry” nights on Provo. The Provo Fish Fry has blossomed into a massive party attended, it seems, by the entire tourist population on the island as well as local “belongers.” Local bands disturb the peace while purveyors of all manner of seafood and souvenirs hock their wares. The food was good, the beer was cold, and the music was loud! After a couple of rum punches, Brian was the unofficial winner of the evening on-stage dance contest!

On January 19, we headed about 5 miles NE to the Leeward Cut, an anchorage near Blue Haven Marina, where iguanas could be found. We had our anchor set off Little Water Cay by 11:30. After lunch we ventured ashore only to be met by very officious “Ranger Rick” (our label) who was oh-so-proud of his position of power. He demanded $10/person to walk around “his” NATIONAL park. An additional $15 for a longer walk. We weren’t quick enough to point out that the Turks and Caicos isn’t even a nation! Needless to say that “Rick” became the butt of many subsequent jokes.

Brian and Kelsey left Team Pazzo the following morning. In the afternoon, Bruce, Cindy and I felt Julie’s guardianship. We decided to snorkel on a small freighter wreck about 3 miles downwind of our anchorage in the Leeward Cut. We omitted to bring a handheld VHF with us. We enjoyed a rollicking downwind ride all the way to the wreck whereupon “Bruiser,” our 15hp Yamaha quit and wouldn’t restart. Faced with the prospect of rowing all the way home, our snorkeling was brief. While fish and lobster were reportedly in abundance around the wreck, we found only a couple of lionfish, beautiful, but venomous predators that kill everything on the reefs. Back in the dinghy, we discovered that Bruiser wouldn’t idle, but once started, we could keep him running at speed. So, we bounced our way, very uncomfortably, over 1 – 2 foot waves all the way back to Pazzo where we thanked Julie for watching over us! It would have been a very long and painful row upwind to the Island!

We spent another couple of days at the Leeward Cut, working on Bruiser’s carb and finally taking it to the Caicos Shipyard where mechanic John also failed to resolve the problem. We explored the Grace Bay resort area and hiked to Bird rock for disappointing snorkeling (very strong current and poor visibility).

On January 23, we used first light to make our way out of the Leeward Cut to beat our way out around North Caicos, Middle Caicos, and South Caicos Islands, finally pulling into Cockburn Harbor on South Caicos at 20:00. Rolly anchorage but nice to be tucked in for the night.

South Caicos is a small island where Cockburn Harbor is the only settlement. It’s a lovely, sleepy little community where everyone knows everyone else… and their business. Clearing out of the TCI was an ordeal. The customs officer who normally takes care of all the paperwork was out on sick leave for the day. So, the police officer on duty (Leone) was left to figure it all out, with telephone help from the customs office on Grand Turk. Immigration clearance was easy once we warmed up the very surley officer who made it clear that being stationed on South Caicos was some sort of punishment. Leone, on the otherhand, felt like she hit the assignment jackpot with South Caicos. No problems here. Just an easy job for a beat-cop. Her “cruiser” was in the shop after hurricane Irma damaged it so she hauled us around in her bright little Kia rental car. She gave us a full tour of the island and introduced us to her daughter. Meanwhile, Bruce went bone-fishing with Marvin, the cousin of Daryl, whose restaurant served us delicious lobster sandwiches.

We would have liked to stay a few more days, but Cockburn Harbor would have been an uncomfortable anchorage in an approaching cold front. So, at midnight, with ¾ moon to help us find our way, we hoisted anchor and set sail for Luperon on the north coast of the Dominican Republic. 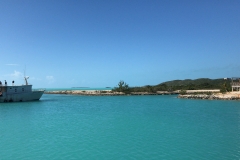 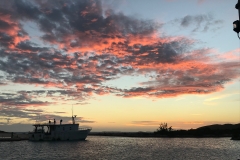 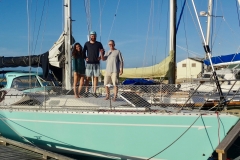 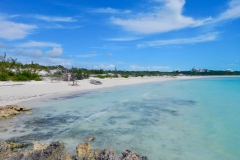 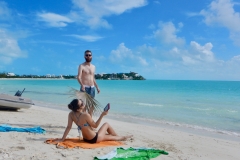 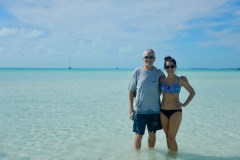 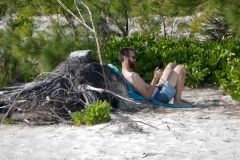 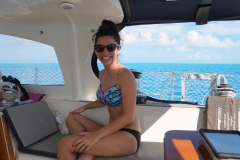 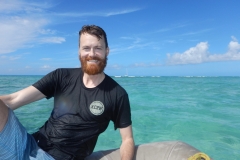 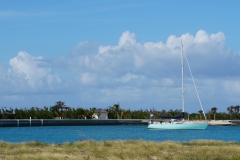 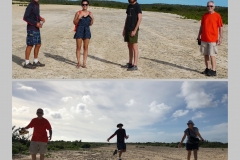 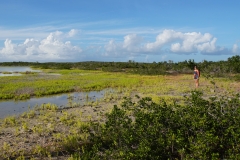 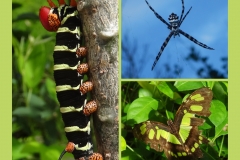 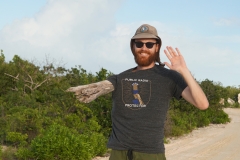 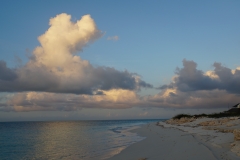 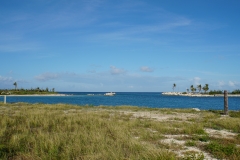 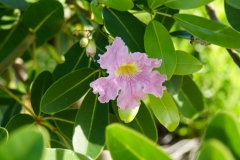 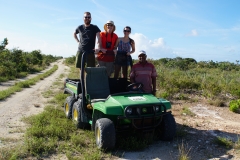 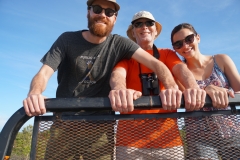 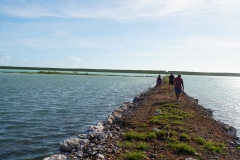