With easterly wind blowing at 15 knots, we made a speedy 14 hour dash south from South Caicos Island to Luperon on the north shore to the Dominican Republic (DR).  Our electronic charts agreed with the well-marked channel so wiggling thru the reef to the still waters of Luperon was straight forward.   With its extensive mangroves and overlapping barrier reef, Luperon is one of the best hurricane holes in the Caribbean.   The town, visiting boats, and harbor fared well in last year’s terrible hurricanes.

The entry formalities, too, were straight forward, although each function had to extract its share of fees:  $31/person for immigration, $10 for customs, $10 for port entry and $10 for agriculture.  Only the military commandante didn’t ask for money.   He came with the drug enforcement officer to inspect the boat… we later learned… to prevent the drug enforcement officer (nicknamed “goon.”) from extorting money from us.  We love Carlos!

We hunkered down in Luperon for a couple of days while a strong cold front passed over the DR with strong northeasterlies.  Luperon is a quiet little town with several bars, restaurants, a bakery, an ice cream shop, and friendly Dominicanos everywhere!  El Presidente lager is the beer of choice in the DR and comes in a very large bottle – about 24 ounces!  The club Marina Blanco welcomes visiting yachts with a nice bar, restaurant, showers, and dinghy dock.  So welcoming is this quiet harbor that many cruisers come and, it appears, never leave!   We were warned not to get too comfortable.   While we stayed longer than we should have,  Luperon served us well as a home base to

(a) visit La Isabella, the first colonial town, and Columbus’ first home in the New World  and

(b) make a trip to the 27 waterfalls (unfortunately only 12 were open as heavy rains washed out the trail to the upper falls.) and

(c) adventure by guagua (small van) and public bus to Puerto Plata, a large, dirty city on the north shore.  The ride to and fro was the best part.  Although, to be fair, we were pressed for time as we needed to get back to clear out of Luperon.

As in Cuba, yachts need clearance papers each time they enter or leave port.  We’ve been told that this is to thwart drug trafficking.  Whatever the reason, it’s a hassle to go thru all the paperwork in order to move from port to port.

Shortly before sunset on February 2, we hoisted anchor and powered of Luperon, bound for Samana, on the eastern end of the DR.   Our plan was to follow Bruce Van Sant’s advice by hugging the shore where the night “katabatic” winds flow down from the hills and add to the “land breeze” to offset the ENE trade winds.   Well, with the trades blowing ENE 15, motorsailing resulted in slow and uncomfortable motion.  So, we rolled out the jib and headed offshore in lumpy seas.  It was an uncomfortable night with squalls wrestling with trade winds until the sun came up and the trades assumed control offering us a lumpy, but good sail along the eastern half of the island.   We caught a nice mahi-mahi in the afternoon and spied a couple of humpback whales shortly before sunset.   Bruce whipped up a nice pineapple salsa to garnish the fine mahi we enjoyed as we rounded Cabo Samana for the final leg into Bahia Cacao, a small chink on the north shore of Bahia Samana, about 4 miles from the marina.

After a rolly night, we moved on to Puerto Bahia, a lovely but surgey upscale marina near the town of Samana.  The marina offered a couple of beautiful swimming pools, good restrooms, and passable WiFi internet with which to plan our inland travels.  It didn’t take long before we had Pazzo secured in the marina and a rental car hired for serious adventuring.

Over the next 5 days, we logged quite a few kilometers, covering the entire Samana peninsula and the south coast of the country from (Capital) Santo Domingo to Barohona and the Haitian border.   Throughout the country, the beer was both large and cold.

Santo Domingo is a large sprawling city, complete with awful traffic and all manner of pollution.  We spent most of our time in the colonial center, visiting 15th century ruins of forts, hospitals, churches, and monasteries.

From our base in Barahona, we visited Lago Enriquilla and the squalid border crossing between the DR and Haiti.   The following day, we enjoyed a day’s tour of the Pedernales region with Julio, a guide recommended by our B&B.  The coast along the SW edge of the country is breath-taking. We sampled local fruit along the route and paused at caves and gorgeous waterfalls. While Julio waited in the car. We took a boat tour in Parque Jaragua to see flamingos and assorted other water-fowl.

While we’ve seen our share of insane driving in Central and South America, this was Bruce’s first experience behind the wheel on idiot-infested roads.  It seems that traffic rules, and even headlights at night are merely guidelines.  We did note, however, the effective “sleeping policemen.”  We call ‘em speed-bumps and they usually project above the roadway.  In the DR (and elsewhere), they’re deep ditches that’ll test your suspension and earn your respect!

On February 9, still in Barahona, Cindy received news that the father was in hospital and not doing well.  She decided to return to Portland as soon as possible.  So, we beat feet back to the boat in Puerto Bahia to pack her up and deliver her to a small airport about 30 minutes from the boat.  Unfortunately, this airport serves only Air Canada for international flights so she endured a 17 hour trip from Samana to Portland via Toronto and Vancouver.

Meanwhile, Bruce and I made the best of the last couple of days with the rental car.  We adventured to Cascada El Limon, a huge and beautiful waterfall (and long hike) in the middle of the Samana Peninsula.  The following day, we enjoyed a day at Playa Rincon, a 2-mile long white-sand beach on the north shore of the Peninsula.  Large, cold Presidente beer was a lunch-time favorite.

With rental car safely returned, we took leave of the Marina for a 2-day visit to Parque National de Haistices, a large national park on the south and west shores of Bahia Samana.  We watched for whales (said to be mating and calving in the Bay) but found none.  We did find a couple of large networks of caves where the native Taino Indians lived and carved petroglyphs in the stone walls 500 years ago.  I wonder if Taino miscreants found disfavor with the village elders for defacing the walls of the caves.  Ancient graffiti as it were.

On February 16, we slipped our lines at Puerto Bahia and made our way to Cayo Ventado, a lovely small island and beach off the town of Samana that is overrun daily with sun-worshipping tourists, tour operators, and purveyors of all the usual souvenirs.  While foul as an attraction, it proved to be a nice place to drop the hook for a few hours to rest and make final preparations before setting off across the Mona Passage to Puerto Rico. 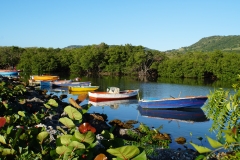 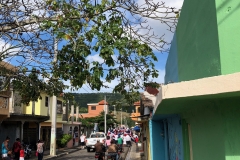 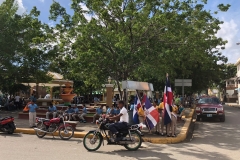 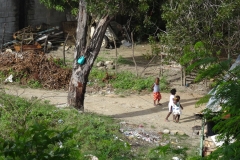 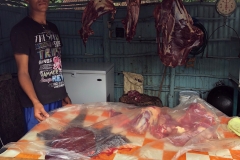 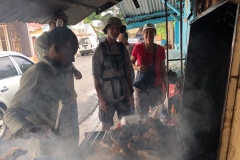 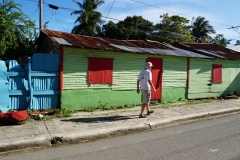 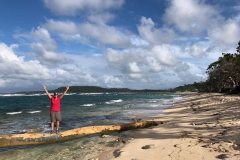 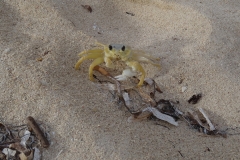 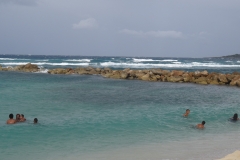 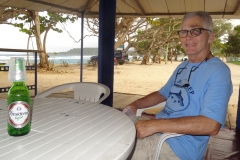 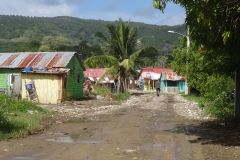 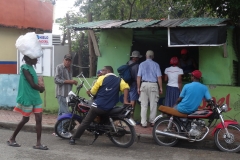 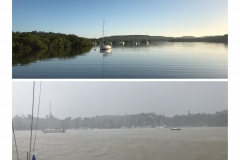 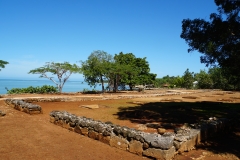 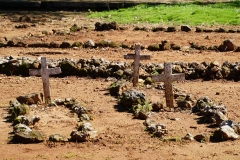 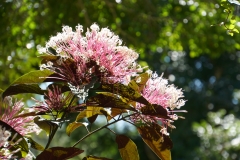 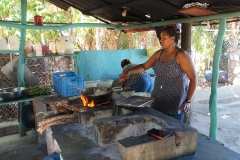 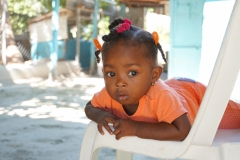