On February 16, Bruce Luscombe (Brother-in-law) and I hauled our anchor in the lee of Cayo Ventado near the town of Samana, Dominican Republic. The trip across the Mona Passage (between the DR and Puerto Rico) has a nasty reputation for foul weather and current. The trade winds tend to accelerate thru the passage and if easterly, the wind is on the nose. We were fortunate to have a bit of north in the trades which allowed us to sail the entire passage close-hauled on port tack. For 22 hours, with wind ENE 18 – 22 knots, we pounded our way along the coast of the DR, past Punta Cana and Mona Island and into Puerto Real on the western shore of Puerto Rico.
Puerto Real is a quiet little bay, about 9 miles south of Mayaquez. It is recognized as a superior hurricane hole and attracts many yachts from all over Puerto Rico when hurricanes threaten. Sadly, the harbor is currently littered with wrecks sunk by Hurricane Maria in September, 2017. Hurricane holes are simply not suitable for direct strikes or category 4 or 5 storms.
Sadly, Cindy’s father passed away on February 17. He had been struggling with chronic diastolic heart failure for several years. He was ready to go see his Lord. So, Bruce and I set about preparing Pazzo to wait for us while we returned home for a week or two for the funeral and to take care of some business.
On March 4, Cindy and I returned to Puerto Rico to continue our grand adventure. We spent a couple of days touring Old San Juan, the colonial center of Puerto Rico’s capital city. Very much like Cartagena (Colombia) and Santo Domingo (Dominican Republic), Old San Juan has a rich history as one of the first cities of the New World. Of course the Taino Indians populated Puerto Rico centuries before the Spanish arrived, but documented history pre-1492 is relatively thin. Typical of the 1500s, the Spanish built tall walls around the city and massive fortresses to repel British, French, and Dutch sea and land invasions. The Old Town retains its colonial charm with quaint meandering streets, scattered parks, and some period architecture, although not as complete as Cartagena. We enjoyed the hospitality of Julia Roig, one of Cindy’s Children’s Hospital. colleagues from over 20 years ago. Julia and her husband, Tony, live in Ponce, P.R. and Julia maintains an apartment in San Juan near her work with the C.D.C.
We spent a night with Tony and Julia at their beach place on Playa Santa on the Southwest shore of PR. Wonderful hosts with the most delicious shrimps on the Bar-B that we’ve ever had!
After touching base with Pazzo, we spent a couple more days with our rental car, exploring the western third of PR, including a disappointing trip to Las Cavernas de Rio Camuy. The caves are reported to be spectacular with cascading falls, but we found them closed due to damage from Hurricane Maria which absolutely pounded PR. Many roads were closed and power has not yet been restored to the eastern end of the island – even after 6 months!
March 7 found Pazzo on the go once again, motoring eastward along the south shore of PR in light winds. Not unhappy to be running the engine more than usual as our DC refrigeration system is on the fritz and our engine-drive refrigeration is working well.
On our way to Ponce to pick up Chloe (who flew into San Juan), we plopped the anchor for a quiet night off “Gilligan’s Island,” so-named because the island looks like the island on the 1970s TV show and one of the local fishermen looked like Bob Denver, the lead actor on the show. To our surprise, the island has become a party beach, crowed with both locals and tourists escaping for a day on the beach and floating in the assorted lagoons and estuaries.
Chloe joined Team Pazzo on March 10 after she and Cindy had a couple of days relaxing in a resort on the NE corner of PR with the Luscombe family. The following day, we got an early start, once again attempting to take advantage of the lighter night and early morning easterlies. Once again, we gave up motoring and motor-sailing in favor of beating upwind (she IS a sailboat, after all), pounding over the short, steep waves. Between broken jib sheet and a flooded gas bottle locker, the day proved challenging, but fortunately, not long.
The following day, we moved further east to the south shore of Isla Vieques, one of 3 islands that constitute the Spanish Virgin Islands, but are technically extensions of PR. Vieques is famous for Mosquito Bay, a small body of water richly endowed with bioluminescence. We dinghied ashore for the short hike to Mosquito bay, but found only disappointment. The local guides told us that the brightest bioluminescence is on the far shore (which we couldn’t access without a kayak) and, further, that the bio-intensity isn’t very strong currently. Fortunately, we’ve seen very intense bioluminescence elsewhere in the world, including our great Pacific Northwest and along the Pacific coast of Mexico where streaking dolphins look like torpedoes in the night!
After a couple of rolly nights on Vieques, we set sail for the US Virgin Islands, stopping for some snorkeling on the reefs of Isla Chivas. For a nice change, Pazzo found favorable winds offering 6 hours of great close reaching into the lee of Water Island, a barrier island protecting the inner harbor of Charlotte Amalie, the capital of St. Thomas, USVI. 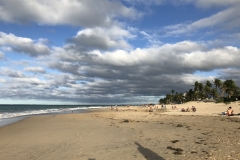 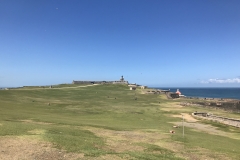 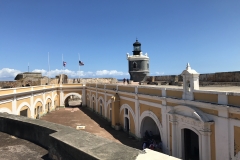 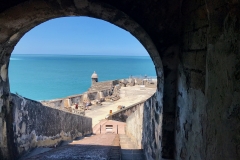 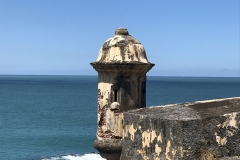 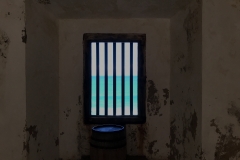 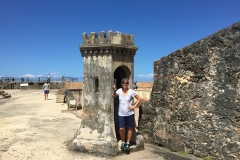 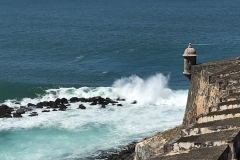 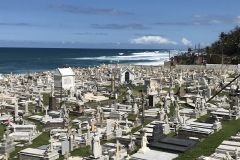 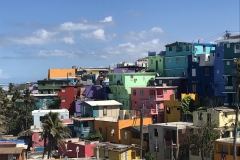 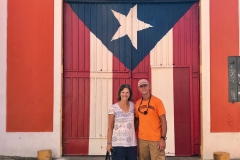 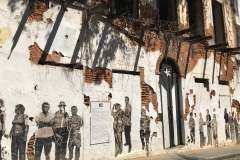 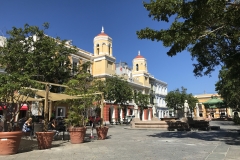 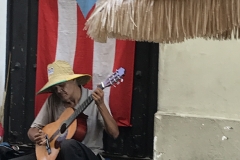 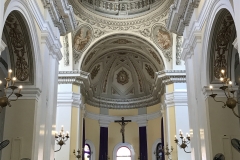 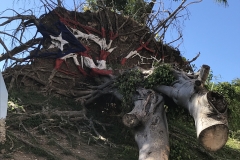 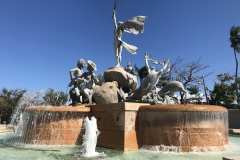 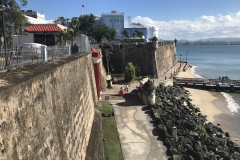 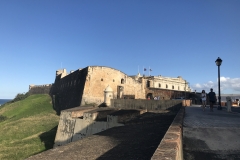 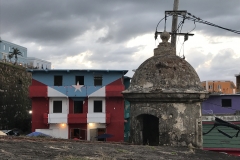