The Dutch Antilles are comprised of ½ the island of St. Martin / Sint Maarten, Saba, St. Eustaruis in the NE Caribbean along with Aruba, Curacao, and Bonaire in the SE Caribbean, off the Venezuelan coast.  On this swing thru the Caribbean, Pazzo visited only Sint Maarten and Saba.

At 37 square miles, the island of St. Martin is the smallest landmass in the world to be shared by two countries.  The southern and more developed half is known as Sint Maarten and is a protectorate of the Netherlands while the northern half, St. Martin, is a department of France.  The French side is known for its chic boutiques, exquisite cuisine, and of course, fine bakeries ☺.  The Dutch side is home to the larger harbors, commerce, banking, and larger casinos.   The island took a direct hit from hurricane Irma in September, 2017.  Virtually all yachts in Simpson Lagoon, a well-respected hurricane hole, were damaged or destroyed.  All marinas along with all businesses suffered significant damage from the 185 MPH winds and torrential rains.

Despite the devastation, we found the islanders to be a resilient people.  We found the Dutch side to be further along in their recovery than their French counterparts.  We’re told this is because Holland has been quicker to release recovery funding.  Most businesses on the Dutch side were operational and serving the yachting community at 100%.  The lagoon and boatyards are still littered with sunk, capsized, or badly damaged yachts ranging from shredded inflatable dinghies thru smaller super-yachts.  Navigating the lagoon is largely a matter of following the channels with a wary eye for sunken hulks.

After clearing into the island on the French side at Marigot, we enjoyed a reunion with our Danish Friends on Johanna.  Fun to catch up with Christian, Cille, Gustav, Bertrand, Liva, and new addition Sylvester.  We love the French process for entry/exit clearance.  It’s a DIY affair on a computer situated at one of a number of local shops who’ve been contracted by the French government to keep track of yachts and crews coming and going.

On our 34th wedding anniversary, we picked up a “hitch-hiker” (in our dinghy) who recommended Le Petit Auberge, a tiny French restaurant in the largely destroyed Port Royal area.   He endorsed the place as the best cuisine on the island.   He didn’t lie!  Owner and head chef, Franz, served up some of the finest food we’ve ever enjoyed.  So good, in fact, that we came back for two more dinners during our 10-day stay on and around the island.

Before taking the boat into the Dutch side of the lagoon for projects and repairs, we circled the island, taking in the devastation at Anse Marcel (once an exclusive upscale resort and marina) and the idyllic white sand beaches of Tinte Mare.  We noted much destruction of hotels and resorts as we made our way back to Simpson Bay and the lagoon.   Once inside the lagoon thru the narrow pass and lifting bridge, it was all business.  We had our boom repaired, equalized our batteries, recut the luff of our jib, replaced jib sheets, tried (but failed) to fix DC refrigeration system, and assorted smaller projects.  We capped our long work days, of course, with $2 happy hour rum punch drinks at Lagoonies Bistro.

On April 11, we caught the early bridge opening to exit the lagoon and set sail on a short 4-hour sail to the decidedly upscale island of St. Bartholemy (St. Barths), but decided on a pit-stop at Ile Fourchue, just north of St. Barths for hiking and snorkeling on this lovely little island.

The following day, we skipped down to check into the country in Gustavia, St. Barth’s largest town, and the site of the St. Barth’s Regatta, presently underway.  We anchored near “Rambler,” a 98 foot speed machine and across the narrow channel from a few other maxi-racers and high-speed catamarans and trimarans.  Fun to watch the racing from the anchorage and from our day-trip anchorage up the coast a couple of miles: Anse du Colombier.   Pretty amazing to watch some of these yachts scream across the entrance of Anse at nearly 20 knots!

Two days in St. Bartholemy was enough for Pazzo.  On April 14, we picked up our anchor for a quick sail (wind behind!!) down to Saba Island, a small Dutch rock SW of St. Barths.  Saba isn’t popular with cruisers since the anchorage can be a bit rolly and the wind tends to whistle down the leeward coast where the Saba Island Parks Department placed moorings for the convenience of cruisers.  Add to this, a mile-long dinghy ride to the nearest dinghy landing where customs and immigration are happy to welcome yachties to their lovely volcanic island.

At only 5 square miles, Saba is Holland’s smallest protectorate.  1500 EU citizens populate the island, nearly all living in one of two towns.  Windward Side is the largest town, located on (wait for it…) the windward side of the island.  The Bottom, located high in the hills overlooking the small boat harbor is named for the floor or bottom of the crater of what was the towering Saba volcano.   The island is known for its impressive diving and snorkeling (although we found it to be C/C+).   The islands are also incredibly proud of their road.   It is a poured concrete road nearly circling the island and, in many places, clinging precipitously on shear cliffs.  Extremely steep in places and twisting through the valleys, the road is called, “the road that couldn’t be built.”   Years ago, Dutch engineers visited the island to assess the difficulty of building a road to supplant the set of steps known as “The Ladder.”   Hearing this verdict, a Saban leader took a correspondence course in civil engineering and proceeded to build the road anyway.  It is, indeed, an engineering marvel and a tribute to Saban perseverance!

Cindy and I hiked 1064 steps to the top Mt. Scenery (2900’ above sea level) for stunning views over the Caribbean in all directions.   We were fortunate to reach the summit before the daily clouds snuffed the views.  Following our hike and lunch of curried goat stew,  “Lollipop,” our taxi driver (and hotel owner/laundry lady) gave us a driving tour of the very clean and quaint island.  Building code requires homes to be painted white with red roofs.  Green shutters are highly recommended.  Businesses may choose whatever color scheme the choose, but we noted that most were white with red roofs.  Saba has what locals call a “medical school,” but on further questioning, it sounds like a preparatory school for students wanting to go to medical school elsewhere.  The hospital sounds more like a clinic with acute patients evacuated to St. Martin/ Sint Maarten.

On April 16, we sailed for the volcanic island of Montserrat, famous for the 1995-1997 eruptions of its Soufriere Volcano, Chances Peak.   Clearance formalities were very easy from our anchorage in Little Bay, but we soon discovered the beautiful beach and reasonably good snorkeling to be found just around the corner at Rendezvous Bay.  The highlight of our visit to Montserrat was a day-trip we took with Pazzo to the south end of the island where the capital city of Plymouth was destroyed in the eruption.  They call Plymouth the buried city, and for good reason.  From close offshore, we could clearly see chimneys and rooftops, businesses and church steeples, appearing to float on a sea of mud- and ash-flows.  A supermarket stands half-buried in mud/ash.  The destruction of Plymouth and other villages in valleys of the volcano, was complete.  A sobering sight to be sure!

April 19 found Pazzo’s sails pulling for a 5 hour one-tack beat to Antigua.  We’re starting to appreciate why the trade winds are so-named.  Day and night, the trades blow from the east at a reliable 15 – 20 knots.  Since 1492 when Columbus (Cristobal Colon) made his first historic voyage to the Caribbean, sailors have relied on these consistent winds to carry their trading ships to far shores and back. 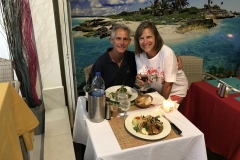 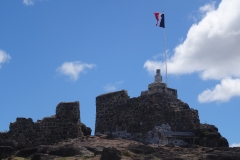 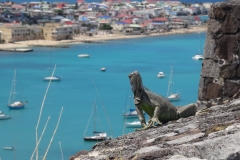 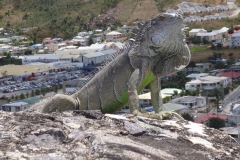 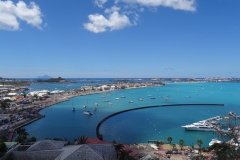 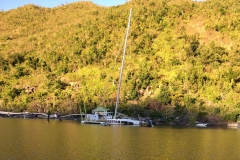 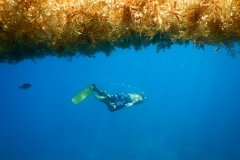 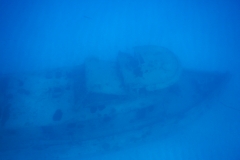 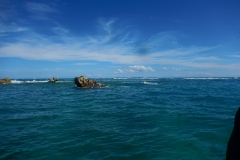 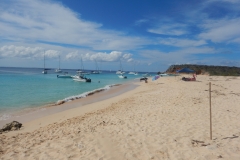 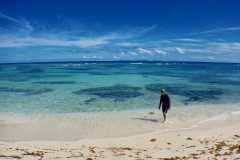 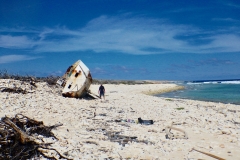 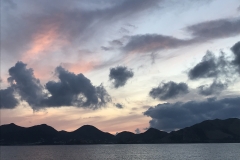 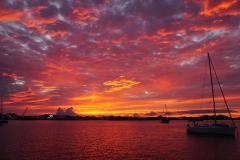 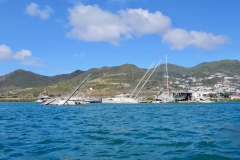 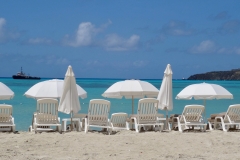 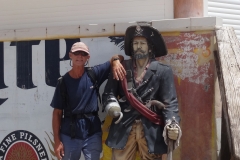 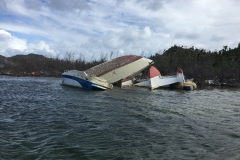 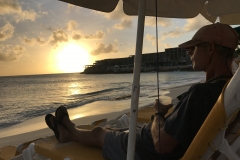 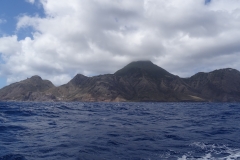