On May 15, we sailed north to the island nation of St. Lucia where we welcomed Pete and Tania Swain, friends from San Diego, aboard for our northward trip back to Antigua.  The expanded Team Pazzo spent a few days sailing and wandering around Soufriere Bay, Marigot, and Rodney Bay before sailing north to Martinique.

Le Marin is the yachting and chartering capitol of Martinique.  We found, literally, thousands of sailing craft of all types – an unbelievable collection ranging from brand new charter fleets to partially sunk derelicts.  The assorted bays comprising Le Marin were densely populated with moorings while much of the shoreline featured marinas, many in various states of disrepair.  We did find large supermarkets and proper boulangeries to keep Pazzo well-provisioned.

From Le Marin, we proceeded north to a small but calm anchorage off St. Pierre Village.  Happy hour was exciting in the anchorage with an emergency response helicopter depositing  EMTs on the dock to assist a charter catamaran moored there.  Turns out that one of the charter clients drowned while swimming near the yacht at anchor. Likely a heart attack.  All very sad!

After a couple of days in Martinique we moved north to Dominica, an independent nation hard-hit by Hurricane Irma last year.  Despite plenty of storm preparedness, we found ample evidence of Irma’s wrath.  While poor, the Dominican people are warm and welcoming.  We made the passage to Dominica with Elie and Francoise aboard “Meridienne,” their very quick and well-sailed Waukiez 45.   Elie and Francois proved to be fine French company as we toured the Indian River and enjoyed happy hour with them.   The following day, we sailed to Marie Galant, a short upwind sail where “Meridienne” strutted her upwind stuff.   Marie Galant is a small island on the SE corner of Guadeloupe where we rented scooters for a tour of the island, complete with a visit to a rum distillery and a couple of swim-stops on the pristine beaches found on the leeward shore of the island.

On May 24, we sailed a few hours to The Saints where we had stopped on our southbound trip.  This proved a convenient stopover for a lovely dinner ashore with a BIG THANK YOU to Pete and Tania before heading out early the following morning for our northward sail to Deshaies (Day-Hay).    Including a 1-hour pit-stop for a shopping run to the “Super-U,” our favorite French grocery ,  we made the trip to Deshaies in 10 hours – just in time for sun-downers in a calm anchorage.

The following morning called for a “boulangerie” run to stock up on fresh baguettes and French pasteries.  Then, it was off to Antiguia and Cindy’s favorite anchorage off Green Island.   While at anchor, we noticed a yacht on the fringing reef about 2 miles out.  Pete an I quickly jumped into our dink with long lines and kedging anchor to see if we could assist.  En-route, we stopped at a nearby kite surfing beach to ask if the owner of a high-powered ski boat would take us out to help the stranded yacht.   Turns out that the stricken vessel was a Dream Charter yacht who went up on the reef a few days ago.  There was already a crew there working to drag the boat off.  Nothing for us to add.  So, back to the good ship Pazzo for a cold beer with the binoculars to take in the (fruitless) show.

After a 2-day stopover in English Harbor to share a bit of rich history and a Steel Band concert with Pete and Tania, we sent them off to the airport and moved Pazzo to Jolly Harbor where she waited patiently for us during our 3-week home visit for Kyra’s UW graduation, to see family and friends, and to help organize Cindy’s father’s estate. 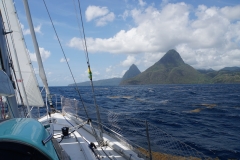 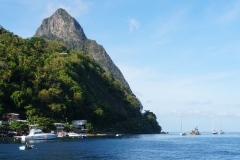 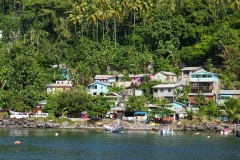 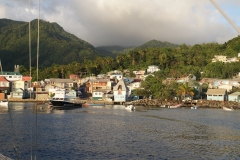 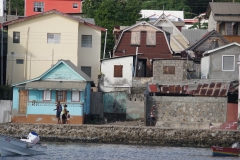 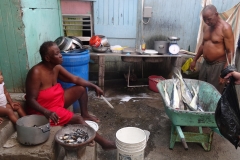 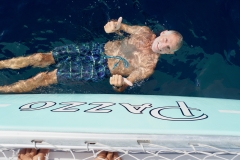 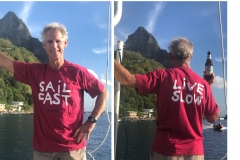 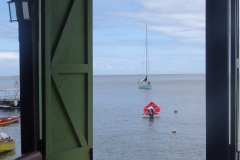 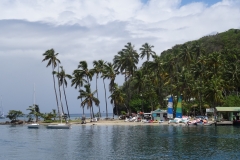 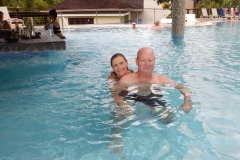 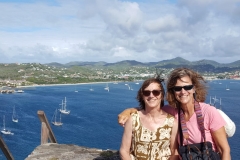 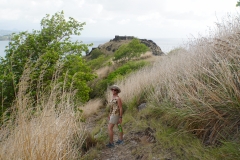 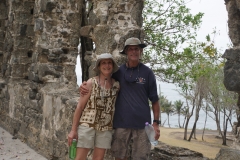 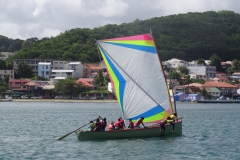 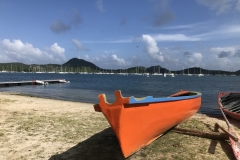 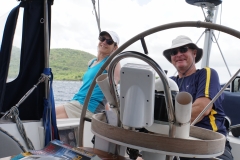 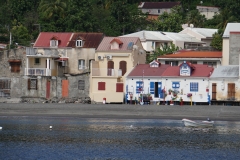 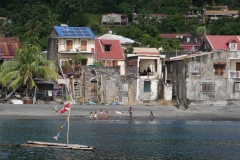 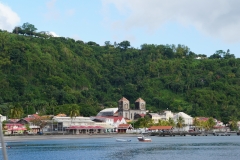