After a most delightful 3-month stay in Brazil, our passage to Uruguay was characterized by winds from all directions and many speeds. We were mostly reaching and running, but we encountered a small cold front which put the winds on our nose for half a day with gusts over 30 knots.

Our stay in Uruguay was pleasant but short. After a few days in Punta Del Este, we sailed west into the Rio de Plata delta past Piriapolis, Montevideo, and on to Colonia, one of the oldest colonial cities in Uruguay. Our plan was to stop in Buceo, the small yacht harbor adjacent to Montevideo. However, with low tide and large following seas, the port captain dissuaded us from entering the harbor. We asked permission to spend the night in the Commercial port of Montevideo. Permission denied! Montevideo port control demanded that we sail onward to Colonia on our approved zarpe. This was unwelcome news as the winds were gusting over 30 knots. So, we tucked a second reef and went zooming up the Rio del plata at 8 – 9 knots in water only 20 feet deep, just outside the busy shipping channel. Nervous night!

In the morning, we found refuge in the shallow, but well-protected bay of Colonia. The very friendly officials welcomed us to their quaint harbor which was tightly packed with small yachts on moorings. The brisk winds continued for a couple of days while we toured the city, enjoyed Uruguayan cuisine, and rested. The history of Colonia is interesting as control of the city passed from Portugual and Spain and back again a few times before Uruguay gained its independence.

On 11 November, Pazzo sailed 30 miles south thru dredged channels and into Buenos Aires where we found a warm welcome at Yacht Club Argentino in the city center. The club is a lovely facility well positioned to explore this huge and magical city… and welcome John and Ana Brinson (John’s flame) to Team Pazzo.

BA has been called the most European city in South America… and for good reason. Our visit was largely limited to the city center which is characterized by a rich blend of modern and renaissance and a bit of gothic architecture. It is not unusual to walk between towering sky-scratchers, and turn a corner to find oneself in a quiet tree-lined plaza or facing a gothic cathedral. Eateries are ubiquitous to the point where we pondered the question: “If we ate at a 3 different venues every day, never repeating, could we EVER exhaust restaurant options in this city? “ It was also refreshing to see the government investing in both improved infrastructure and preservation of heritage sites. We found the people of BA generally warmer and more helpful than in most other big cities.

We also took a 1 hour train ride out of the city to visit the boatyard suburb of San Fernando. This reminded me of my many train rides out of Amsterdam to the far corners of Holland. The city yields to the suburbs with quiet streets, small shops and a few outlying factories. Before leaving YCA, we walked across the old city to visit the famous cemetario where Eva Perron (Evita) is buried.

On 19 November, we said farewell to the helpful staff at Yacht Club Argentino and set sail, first east, then south to the eastern-most coast of Argentina and the port city of Mar Del Plata. After 40 hours of lovely downwind sailing under full moon and bright phosphorescence, we picked up a convenient mooring outside the well-protected but shallow yacht basin belonging to YCA. Ana’s introduction to ocean passaging was delightful, one of our most pleasant since leaving Seattle – including scoring a couple of nice Bluefish (kinda like mackerel).

Mar Del Plata is the normal jumping-off point for Argentinan Patagonia, the rugged Atlantic coast of southern South America. The city has good infrastructure and markets for making final preparations, topping up diesel, and checking gear for sailing in the roaring-40s and the Southern Ocean. We met old friends and made new ones at a fish-feed with like-minded sailors aboard: “Kama” and “Maramalda” (Swiss), “Lucipara2” (Dutch) and “Zoomax” (Italian). We spent Thanksgiving Day (Nov 22) working on projects and forwent the normal turkey dinner (not an option!) for a delicious shepherd’s pie, thankyou Ana!

On 25 November, preparations complete, we motored slowly out of the yacht basin and pointed Pazzo south toward Patagonia.

The Argentinian coast guard, Prefectura, is very concerned, or at least interested in yachts sailing south from Mar Del Plata. They have an extensive list of required safety equipment and inspect each yacht for compliance. Our inspection was very cursory due in part to our very complete preparation and aided by (what seemed to be) an important meeting that the inspectors needed to attend. The Prefectura was concerned about our plans relative to the Falkland Islands. Yachts are required to sign a document swearing to avoid these off-lying islands. The animosity dates back to the Falkland/Malvinas Islands war from 1989 and spills over to visiting yachts. For us this wasn’t a problem as it is quite difficult and uncomfortable sailing west from the Islands against the prevailing westerlies.

Our first stop, marking the northern boundary of Patagonia, was Puerto Pardelas on the eastern shore of Gulfo Nuevo. We were welcomed to this wide, enclosed bay by frolicking dolphins and Southern Right Whales. Quite a sight. After anchoring, the whales lolled about just outside the protected anchorage. After a walkabout ashore and a short hike to the vista overlooking Puerto Piramides, we sailed west 30 miles to the small town of Puerto Madryn. The lovely 20 knot NE wind that carried us swiftly across the bay put us on an uncomfortable lee shore, precluding a shore trip due to large breaking waves. After appreciating the protection from a strong SW wind the following day, we learned (the hard way) that the afternoon easterly seabreezes are normal in Madryn. We spent the morning taking care of paperwork and shopping before returning to the dinghy, now trapped ashore with 2-3 foot breaking waves on the shallow beach. Loading the dink with groceries and escaping the shore in these dicey conditions took John’s and my full attention, but by wading in to our armpits, we prevailed without incident. We had to collect Cindy and Ana from the commercial pier nearby before making our escape from this friendly but uncomfortable place.

From Puerto Madryn and Gulfo Nuevo, we sailed south a day and a half to a well-protected bay at Santa Elena. After making sure the anchor was well set, Cindy and I made a shore trip to see what we could find. Desolation. However, after cresting the hill upwind of the boat we spotted a handful of nandu (large flightless ostritch-like birds) race by us, followed by a small herd of guanacos (lamma-like beasts), followed by a couple more nandu. It was a humorous sight, but happened too quickly for Cindy to score a photo.

Early, the following morning, we found a large Magallanic Penguin Colony just south of Punta Roja. Cindy was in photographer ecstacy, snapping pictures of these cute, odd birds, both old and new-born. They weren’t too fussed with us – in fact they seemed as curious about us as we were about them. By early afternoon, we were safely rafted alongside Lucipara 2 in the “bullet-proof” anchorage of Caleta Hornos. This is a favorite anchorage for both north- and southbound yachts waiting for favorable weather. In the several days we spent in Hornos, we enjoyed beautiful hikes, picnic lunches, and warm camaraderie with our Dutch friends.

On 5 December, with Team LuciPara2 aboard Pazzo, we took a field trip from Caleta Hornos to visit Isla Leones. With drone batteries at full strength, Ivar and Floris made some fun videos of the large sea-lion (Lobos del mar) rookery and penguin colony. A hike to the recently(?) abandoned lighthouse revealed a solitary and challenging, but not uncomfortable existence. The narrow-gauge railway installed to presumably transport building materials and large propane bottles suggests that the facility was expected to serve a long time.

Puerto Deseado is a sleepy little commercial port, about midway along the Atlantic coast of Argentina. We found a lovely hike along the tidal estuaries of the river but otherwise the port isn’t really suitable for yachts. The sizable shipyard welcomes visiting yachts for $25USD/day but facilities are filthy and more suitable to commercial tugs and large steel fishing boats which came and went perilously close to our fragile plastic Pazzo. After a few days final provisioning and checking gear we bid farewell to Ana and aimed Pazzo south – again with a Pod of amazing Commerson’s dolphins! 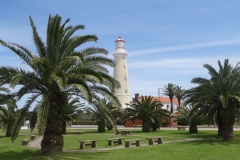 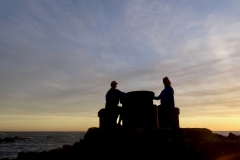 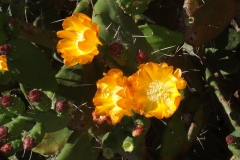 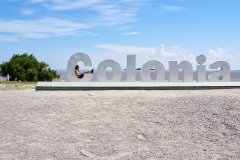 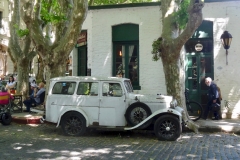 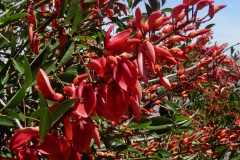 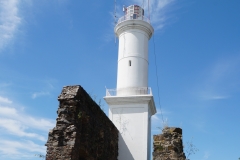 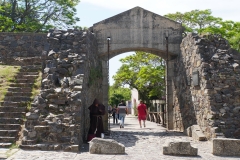 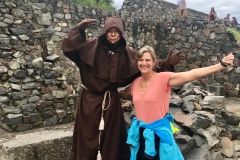 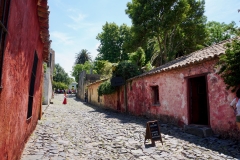 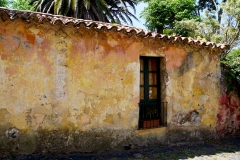 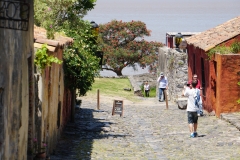 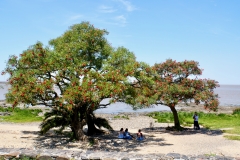 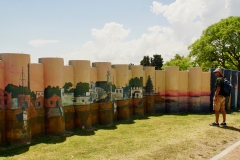 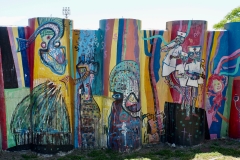 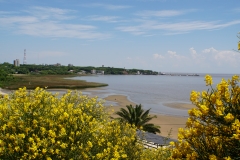 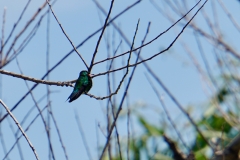 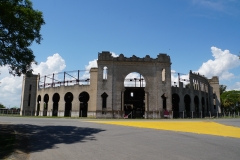 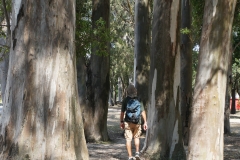 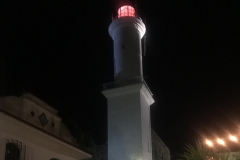