A4. Back and Forth Through the Sea of Cortez

After dropping Cindy off in San Jose Del Cabo for a visit home, John and I sailed North. We had a good beat to Los Frailes which offers nice protection from the north-vector winds that were forecast for the next several days. We spent our time hiking the surrounding hills and snorkeling the surrounding reefs. We made a pilgrimage to Pulmo Reef, the only living coral reef in the Sea of Cortez. Unfortunately, the brisk northerly winds stirred up the water, reducing visibility to nil. Nevertheless, we found pockets of clear water and a nice assortment of tropical fishes inside the reef.   The ride back to Los Frailes in the back of a pickup truck driven by an intoxicated Mexican was definitely “E-Ticket.”

With the exception of a near debacle when our gooseneck pin (joining boom to mast) pulled out while sailing hard on the wind, the balance of our leg to La Paz was uneventful. We landed in La Paz a mear hours before Cindy’s flight landed.

Our experience on the western shore of the Sea of Cortez was wonderful even though we did a lot of back and forthing.

We were in La Paz on three different occasions, picking up and dropping off crew. La Paz is a charming town with a nice walk along the waterfront (Malecon) which includes many bronze statues.

The city boast a number of fine restaurants, but we joined the locals, frequenting a large, informal restaurant serving tacos Al Pastor with meat carved off a rotisserie meat made into tacos. Yum!

The nearby islands of Espiritu Santo and Isla Partida offered several lovely anchorages with good hiking and snorkeling. Unfortunately, all of these anchorages are exposed the frequent night-time westerlies that, on several occasions, rattled us out of our bunks in the wee hours of the morning.

A highlight of this area was swimming with the sea lions on Los Islotes. What an awesome experience! The sea lions were accustomed to snorklers and seemed eager to show off their mastery of the brine. They came right up to us, and gave a good look into our goggles before turning a fluid somersault and gliding away. We made several passes by Isla Islotes and couldn’t help but stop every time. We were very fortunate to be there by ourselves on our final run North. Cindy befriended a playful adolescent who seemed to take great sport in buzzing her each time she moved. It was fun to watch them chase and play with one another!

Our next stop was Isla San Francisco. It is a beautiful large harbor with a sandy beach. John was with us the first and last times we passed the island. We all did the ridge walk along the southern rim. One side of the trail was straight down to the ocean…didn’t want to make a wrong step there!

From Isla San Francisco, we ventured north and south thru Canal San Jose, visiting anchorages both on Isla San Jose and on the Baja Peninsula. In Puerto San Evarista, we found fishermen cleaning their morning catch of Hammerhead Sharks. Small ones. We were sad to see these fine creatures harvested for only their fins which are savored in Japanese soup. We kayaked through the lagoon at Bahia Amortajada a couple times…once in 20k wind and the other time dead calm. It was a beautiful paddle with the cactus forest on the northern end. We spend a day hiking around the abandoned salt fields at Bahia Salinas. John and Willy tried to fix everything but no go.

We made two stops in Bahia de Los Gatos, a beautiful chink, known for its striking red rock formations, along the mountainous coast of Baja.   Here we spent Thanksgiving Day where we gave thanks for all our many blessings – including this picturesque bay. On our 2nd stop (after Christmas) in Los Gatos, we hid from impressive squalls, complete with lightning and thunder, that slipped southward just outside the cove. Pazzo was happy to be tucked in among towering rock formations.

Pazzo made a couple of calls on the sleeply little Mexican town of Loreto. On our first stop, we anchored in the large lagoon of nearby Puerto Escondito and taxied into Loreto. Our 2nd stop, after Christmas, found Pazzo anchored off the town in settled weather. Loreto, once a thriving fishing village has become a quaint haven for American and Canadian ex-Pats and snowbirds. Not a suitable place for boat projects, but charming nevertheless.

From Loreto, we ventured back south again to leave Pazzo in Marina Palmyra (La Paz) for our Christmas home visit.   After Christmas, John, with good friends Joe and Carol Petrucci and Alex and Penelope Huang enjoyed cruising the La Paz area before Cindy and I returned to join John for the trip north, beyond Loreto, to Bahia Conception.

We made many stops along the way. Among our favorites were Honeymoon Cove where the bees were fierce but the water was turquoise. We loved San Juanico with the beautiful rock formations in the bay that had nesting ospreys in them. The guys convinced me to go up the mast and take pictures of them in their nests. Punta Pulpito was a lot of fun hiking to the top and looking out over the world. In the evening we listened to the rays as they jumped, flapped and flopped back into the bay.

Bahia Conception, a large cut, in the Sea of Cortez, about half way down the Baja down peninsula, was a pleasant surprise. We’d been warned about the obnoxious noise from trucks travelling Highway 1 adjacent to assorted anchorages along the western shore of the bay.   While annoying, the noise was easily offset by the plethora of friendly Canadian RVers who had set up house along the shores of the anchorages. Along with the RV crowd, we befriended a lovely young family working at the Nols Adventure School. We enjoyed a couple of evenings and several afternoons with Alex and Britt along with their two charming young daughters, Inara and Kyra.

After a week exploring Bahia Conception (and waiting for gale-force winds to subside out in the Sea), we pounded our way north (the winds really weren’t done yet L) to Punta Chivato which set us up for a the 80 mile dash across the Sea of Cortez to the Eastern, mainland shore near the cities of San Carlos and Guaymas. 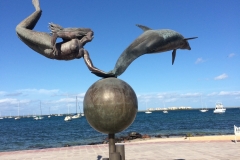 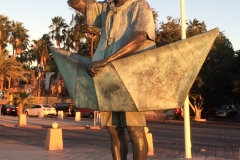 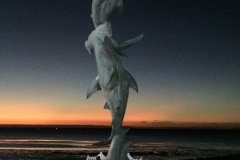 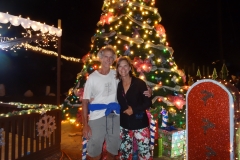 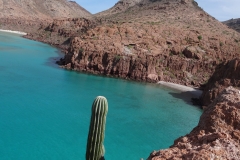 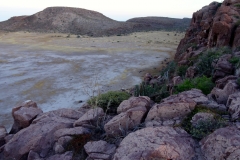 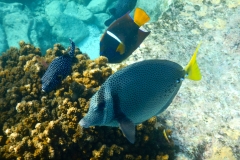 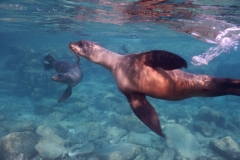 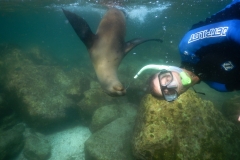 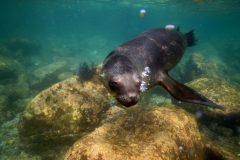 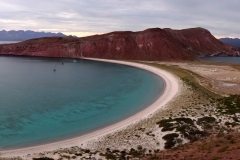 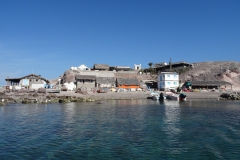 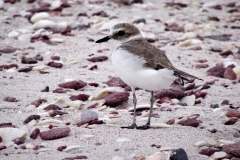 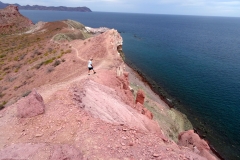 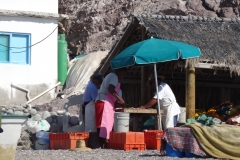 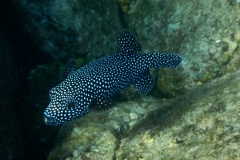 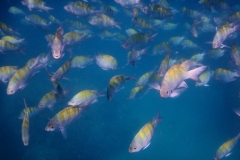 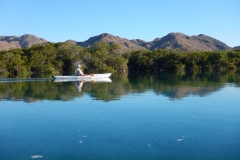 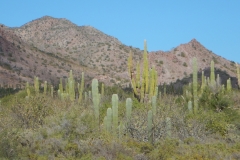