After an uneventful 6 day passage from Nicargua (via Bahia Santa Elana, Costa Rica), Team Pazzo was happy to put the hook down in the “waiting room,” a reasonably calm roadstead anchorage off the high rise apartment buildings of Bahia de Caraquez. Late morning on May 7, our pilot, Ariosto, arrived via panga to pilot us in through the tortured shifting sand channel leading into the anchorage off the small town of Bahia.

We found a very warm (albeit expensive) welcome at Puerto Amistad. Ecuador is yacht-friendly, but the combined fees for checking in and out added up to $360USD. Puerto Amistad took care of all the formalities, allowing us to relax at the bar and tour the devastating earthquake damage from a year ago. The 2015 quake leveled many buildings, left all the beach-front apartments condemned, and twisted streets and infrastructure to beyond recognition. Road repairs are underway, but progress is slow. Until the roads are passable, repairs to buildings and infrastructure can’t commence.

Within a few days, we prepared Pazzo to swing alone on one of Puerto Amistad’s secure moorings while John, Cindy, Anna Brinson (John’s friend), and I set out to explore Ecuador.

We took a long bus from Bahia to Guayaquil where we caught a short flight out to the Galapagos Islands, about 600 miles west of Guayaquil. It was a privilege to stay in Johnny Romero’s Hostel Aquamarine. Johnny was Pazzo’s agent during our 2004 visit to the Galapagos and we’ve kept the friendship alive over the years. With Johnny’s hotel as home base, we explored Isla Santa Cruz before embarking on a 5-day snorkeling cruise of the southwestern islands of the Galapagos Archipelago. This was a cruise very similar to one we took back in 2004, but this time the majestic albatross were mating and nesting in abundance. Swimming with sea lions and sea turtles was a highlight of this trip. We are pleased to share that apart from significant development along the waterfront of Puerto Ayoro, little has changed in the Galapagos since our 2004 visit. The sense of community is still strong and crime is almost non-existant.

From the Galapagos, we returned to Guayaquil, now the largest city in Ecuador due to its booming seaport. While in Guayaquil, John contacted Duverley, an old friend from 2004. He’s now a minister in an impoverished neighborhood. John knew he was in a rough part of town when the taxi driver refused to enter the neighborhood, offering instead to drop him off at a nearby gas station. Duverley and his family met john and escorted him, en masse for his protection, for a most interesting family dinner. It was an eye-opening, cross-cultural evening; a first-hand taste of the racial tension in Ecuador.

While John was experiencing Quayaquil, Cindy and I bounced around mainland Ecuador by bus. Bus stations in Ecuador are akin to airports in America. In large cities, bus stations are multi-floor operations with buses coming and going 24 hours a day. Numerous bus lines compete for passengers, offering the same routes and schedules at attractive rates. We explored the national parks of the Cotopaxi region in central Ecuador, hiking to almost 15,000 feet above sea level, riding bikes thru the rural country side, and climbing deep and steep into a crater to dip our toes in Laguna Quilotoa. We thoroughly enjoyed the sights and bussle of Quito, the world’s highest capitol city. No visit to Quito is complete without exploring el “Ciudad Mitad del Mundo,” the City of the middle of the earth. This is something of a theme park built on the equator. The park features scientific presentations and fun experiments all related to Ecuador’s unique position on the equator. Highly recommended.

From Quito, we took a long bus ride back to Bahia de Carquez where Pazzo happily awaited our return. After a day of rest, Cindy hopped another bus to Guayaquil where she caught a flight home to Seattle and Portland to see the kids and hang out with sister Julie.

John returned to the boat a couple of days later and we dove right into a big project removing and rebidding all our hatches, several of which had developed leaks over the 12 years since they had last been bedded. Three long days later, Pazzo was water-tight again. That’s when the phone rang…

Cindy was calling from Portland where Sister Julie wasn’t doing well in her valiant battle with lung cancer. Cindy wasn’t comfortable continuing south to Peru and Chile where airports would become increasingly sparse. So, we made a command decision: reverse course for Panama, the Canal, and the Caribbean. The downside of this decision was that we’d be sailing directly into the teeth of the “Wet Season” on the Isthmus, complete with frightening electrical storms and intense squalls. On the other hand, we’d be in the Caribbean where airports are abundant. And, why not spend a year in paradise? Patagonia will just have to wait another year.

So, we bid farewell to all our friends at Puerto Amistad and powered out the winding channel, following our inbound track without incident… although the depth dropped to 8 feet a few times. Our first mission was to scrape the bottom of barnacles and assorted sea flora and fauna that had made Pazzo their home during our absence. After 3 man hours, Pazzo, once again, enjoyed a clean bottom for our upcoming leg north to Las Islas Perlas in the Gulf of Panama. 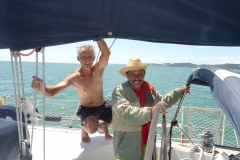 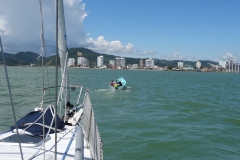 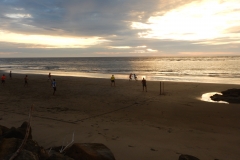 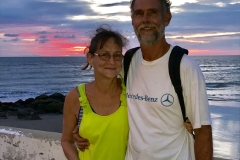 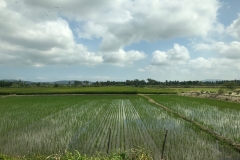 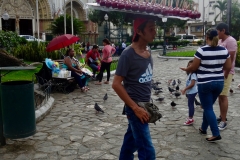 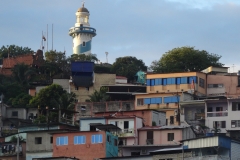 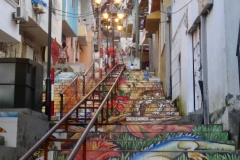 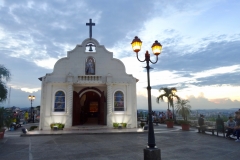 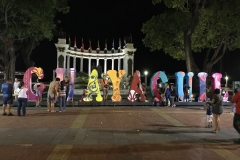 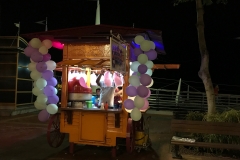 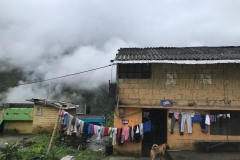 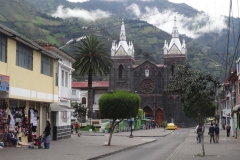 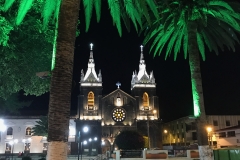 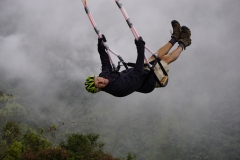 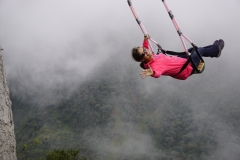 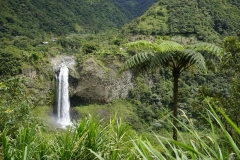 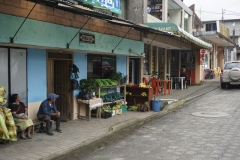 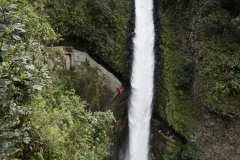