Cindy and I were really looking forward to Cartagena, for a few reasons.   First the city has a rich reputation as a historic and heavily fortified Spanish-colonial seaport punctuated with a blend of 16th century forts and churches.  Second, we were excited to escape the incessant thunder and lightning of Panama.   So, our first few days in Cartagena were bitter-sweet.

Indeed, the old city is rich in maritime and Colombian history with myriad small fine eateries, delicious ice cream shops, yummy street food vendors, and refreshing fresh-squeezed lime- and mandarin-juice carts.  Yeah, we indulged several times a day.   A highlight of Cartagena was Parque Centenario a central park of sorts bordering the walls of the historic center.  Each stroll thru this small park revealed new surprises including red squirrels, large green parrots, massive iguanas, a variety of small monkeys, and a family of sloths.  Apparently, residents have seeded the park with these scaled, feathered, and furry friends for the enjoyment of park visitors.

Adjacent to the historic center, lies Isla Boca Grande, otherwise known as little Miami Beach.   The island is home to wall-to-wall sky scratchers comprising the financial district and the usual contingent of upscale hotels (Hyatt Regency, Marriott, Hilton, etc.)  The ocean side of Boca Grande is a string of small, but lovely sand beaches heavily populated with both visitors and locals escaping the heat of their neighborhoods.

We also discovered that electrical storms are not unusual in coastal Colombia.  While not as frequent as Panama, the storms are every bit as intense and close as we’d seen in Panama.   We saw a few strikes to tall buildings and loading cranes at Cartagena’s large ports.  We also heard of a strike to a powerboat anchored about 20 miles from us in a group of off-lying islands.

After a week exploring Cartagena’s historic center and surrounding “barrios,”  Cindy returned home for a couple of weeks with sister Julie while Willy put the boat in Club de Pesca, the very friendly and tidy local yacht club in order to spend 5 days in an intensive Spanish program.  At the club, and in school, we made many new friends including Lee and Pachi Miles from Cartagena,  Nils and Sara from Munich, and the Tettay family who look after several boats at the Club.

When Cindy returned from Portland to rejoin Pazzo and while awaiting a weather-window that would ease the easterly trade winds (allowing us to sail east to the ABC Islands and on to Grenada or Trinidad), we rented a car for a few days to drive north to Santa Marta and Parque Tayrona.  In Santa Marta we checked out the marina as a possible place to park Pazzo in the event that God failed to deliver the much-needed easing of the trade winds.

After a dreadful drive thru the hellish traffic of Barranquilla, we arrived in Santa Marta tired and hungry.  We found a pizza shop near the marina and gorged on pizza and beer while shopping Booking.com for a cheap room.  I scored a nearby bargain while Cindy identified a best-western option with free and secure parking.   We booked the bargain but quickly aborted and cancelled the booking after driving thru the decidedly sketchy part of town.  Best Western proved to be a solid and comfortable option… albeit without hot water in the shower – the norm in Coastal Colombia.

The boatyard was small but well equipped and professionally managed.  The marina looked new, and empty.   Maybe a half dozen sail and power boats amid over 100 slips!   The highlight of the adventure, however, was our visit to Parque Nacional Tayrona.  This is a 20ish mile long stretch of coastal Colombia with a number of camping and glamping venues and several pristine and deserted beaches.   Many of the beaches are closed to swimming due to strong undertow currents that have claimed numerous lives over the years.  Park guests leave their cars near the park entrance and then hike to their campground of choice.  Camping fees include tent, foam sleeping pads, mosquito netting and rain flys.  Each campground also has a small “tienda” selling cold beer and sodas and a rough restaurant where guests choose between “comida typical de Colombia:  chicken, fish, pork, or rez (beef) along with rice and beans.   Actually, quite good after a long day hiking thru blistering heat.  The following day, we enjoyed an early walk thru the jungle to dip in the Caribbean at La Piscine beach, breakfast at a beach-side lean-to restaurant, and photograph a family of capuchin monkeys high in the trees overhead.

When returning to the boat, we stopped at a mud volcano.  We jumped in and unexpectedly got massages from the locals.  It was a nice side trip.  We spent a few additional days exploring Cartagena and checking weather windows with Chris Parker (Caribbean Weather Expert) before making an executive decision: pull the boat out of the water while we explore inland Colombia and then fly home to Portland for niece Kelsey’s wedding at the end of September.    We interviewed all the Cartagena boatyards and selected Ferroalquimar, the largest and most professional of the Cartagena yards… with one of the largest travel lifts we’ve ever seen.  Puny (15 ton) Pazzo looked out of place hanging in the monstrous 300 ton lift.

Before returning to the States, we spent a couple of weeks kicking around Medellin, Bogota,  and Macarena in the mountainous center of the country.  Macarena, with its modest airport complete with horse-drawn baggage cart, borders on Cano Cristales, a tourist destination featuring pristine rivers decorated with bright red, green, and yellow algae.   This region is nearly inaccessible by road and fuel prices reflect the limited access.  Hence horses, motor cycles, and river boats are abundant.   We also found a healthy military presence as this region used to be the heart of the Sandinista guerrilla faction that waged war with the Colombian government and the Colombian drug cartels during the 1970 and 1980’s.   Tourists come and go via small charter planes from Bogota.

Medellin and Bogota are working hard to overcome their reputations as drug havens.  The Colombian government has a peace accord of sorts in place with the still-powerful, but fading drug cartels so violence has ebbed a great deal.  In addition, Colombia has embraced tourism as a major source of revenue so the government is keen to protect tourists and avoid negative press.    For the most part, we kept to the tourist centers and heavily populated areas of cities and towns,  and always carried minimal cash and valuables.  Cindy hugged her precious cameras as if they were her children.

Medellin is a picturesque city built primarily of red brick and nestled in a deep valley.  This was the heart of Pablo Escobar’s Medellin Cartel which came undone with his death in 1993.  Once a center of violence, the city still appreciates Escobar’s massive contribution of low-income housing extending high into the hills overlooking city center.   As a long, skinny city, Medellin solved much of its traffic congestion by installing an elevated subway running from one end of the city to the other.   Off this main line are a number of branches, including gondola-type cable cars serving the many neighborhoods clinging to the steep valley walls.

Bogota, Colombia’s largest city, is located in the center of the country on a plateau between the Cordillo Central and Cordillo Oriental mountain ranges.  It is a booming metropolis of 8 million people.  Bogota is also known as the street-art capital of the world.  Cindy and I enjoyed a very interesting afternoon graffiti tour.  Graffiti artists come from all over the world to decorate all manner of surfaces with the finest street art we’ve ever seen.

Through our hostel, the Cranky Croc, we took in a “football Derby.”   This is a cross-town soccer match between Bogota rival teams.   We got a small taste of what we were in for when we were frisked three times by police before we were allowed into the stadium.  No belts allowed as belts can be used a weapons when fighting with opposing fans.  We also noted that all the fans in the stadium were wearing red and cheering for the red team.  Where were the blue fans?  Not allowed at this game.  To prevent fighting between opposing fans, the stadium only allows fans from one team on a given match day.  For the next derby, only blue fans will be allowed.  In the 2nd half, a skirmish arose in the stands above the end zone.  Apparently, a group of blue fans entered the stadium dressed in red.  When they threw off their red attire and set off a blue smoke-bomb, the red fans attacked.  Fortunately a multitude of police officers were able to squelch the skirmish and arrest the blue fans before serious harm was done. We’ve never seen such badly behaved fans!   Totally shocking.

From Bogota, we returned to Pazzo in Cartagena to complete final preparations necessary to leave the boat unattended in the boatyard for a couple of months while waiting out the 2017 Caribbean hurricane season. 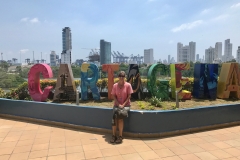 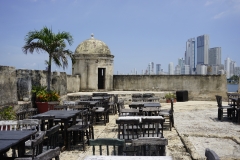 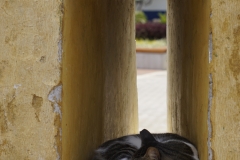 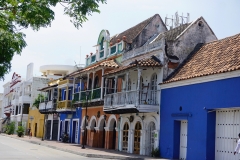 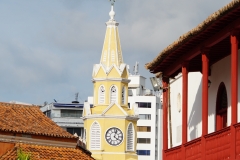 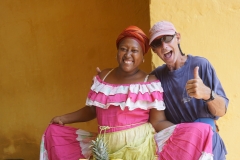 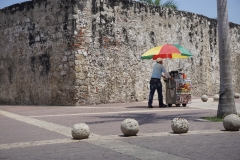 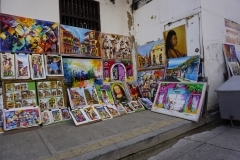 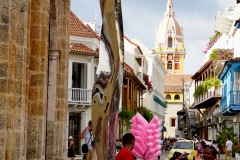 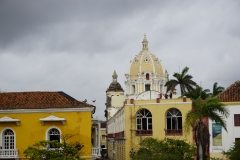 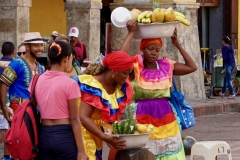 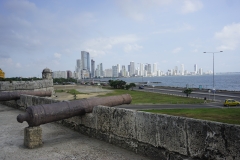 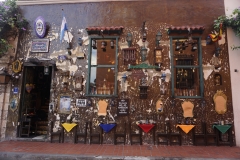 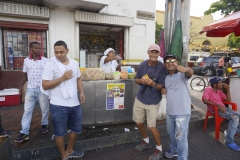 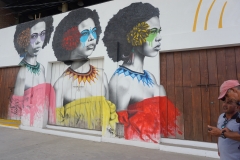 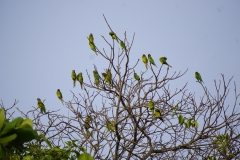 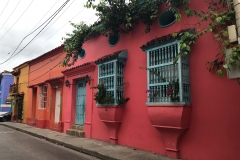 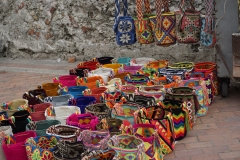 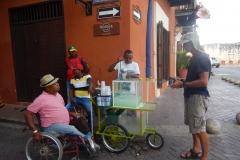 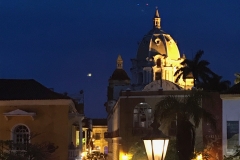