The path from Bahia de Caraquez, Ecuador to the gulf of Panama is a direct north-south shot, plagued by generally light and variable winds. Fortunately, Pazzo’s luck held strong and we (John and Willy) enjoyed 3 days of beam reaching with spinnaker in 10 knot westerlies. We covered the 500 miles to the Las Perlas Archipelago in a smidge under 3 days, well rested and ready for exploration.

The Las Perlas (The Pearls) are a collection of islands much like the San Juans with plenty of beautiful anchorages to choose from. Unlike the San Juans, however, most of Las Perlas is uninhabited. We were warned against anchoring alone in these bays as robberies have been reported by cruisers. Unfortunately, we found no other yachts with whom to share anchorages in June. So, we anchored alone… without any difficulties. We are very careful to always hoist our dinghy from the water and lock dinghy and motor to the boat at night.

We visited and left the small town/village of San Miguel with mixed emotions. On one hand, the town was a poor, filthy little fishing town complete with a large bucket loader stuck in the middle of their little harbor, growing barnacles as the tide ebbed and flowed over it. No rocket scientist was the fella who decided it would be a good idea to drive heavy equipment out onto the tide flats! On the other hand, it was refreshing to see the children happily playing in the streets, on the shores, and in the water. No cell phones or video games in evidence. Just good wholesome social interaction.

On June 20, we sailed north to anchor at La Playita anchorage off Balboa, the suburb of Panama City that comprises the south end of the Panama Canal Zone. Here we were treated to our first serious Panama squall: 30 knot winds, intense and close thunder and lightning, and torrential rain. Both John and I stayed up on anchor watch for several hours while the storm ran its course.

Within two days we’d taken care of all the details (sin-agent) for a transit of the canal on June 29. Very straight forward process that includes a few emails with PDF applications and documents, an onboard inspection, a trip to the bank to pay $800USD for the transit, and a few phone calls to confirm dates. For the next week, we worked on boat projects: repair radar with help of Furuno Service center in Panama City, replace starter motor and inverter, collect necessary extra fenders and extra long mooring lines for the transit, and provision the boat for a few weeks of cruising in the remote San Blas Islands off the Caribbean coast of Panama. John and I also carved out an afternoon for a visit to the very interesting Panama Canal Museum and got out of the filthy Canal Zone for a few days exploring the nearby quiet anchorages of Tobago Island and Bahia Chame.

Cindy and Zach flew in on June 28 to help with the transit thru the Canal, an all-day affair that starts by taking a canal pilot (advisor) aboard at 0600 near the Canal entrance. Friends Jeff and Mary from Yacht “Finte” joined us for the adventure to meet the canal requirement of 4 able-bodied line handlers in addition to helmsman and advisor. The transit includes riding 3 locks up to the level of Lake Gatun (about 90 feet), motoring for 5 hours thru a series of channels across the lake, and then locking down about 90 feet thru three locks to sea level on the Atlantic side. In each lock we either tied alongside a large tugboat (4 locks), were suspended in the middle of a large lock by the 4 very long lines we rented from Taxi-driver Rogelio (1 lock) or tied along the wall of the lock with (again) the long lines (1 lock). By 17:30, we dropped off our advisor and crew in the poor, crime-ridden city of Colon where trusted taxi-drivers whisked them away to safety. It’s been a long-standing joke that that there’s good reason to call this city “Colon.” This assessment of Colon is based only on intel we received from others. All Stiggelbouts remained aboard Pazzo during our very brief visit to the City of Colon.

After depositing our crew and advisor, we immediately made our way thru Center Channel and turned left for the 15 mile run west to Rio Chagres. The entry to the calm waters of the Chagres river is bounded by reefs and shoals on both sides. Although the guide books provide detailed instruction for entering the river, they advise against a night entry where dangers are cloaked in darkness. Nevertheless, here we were at the entrance at 2100, well after nightfall. With radar, GPS chart plotter, and depth sounder all agreeing on Pazzo’s location, we slowly and carefully picked out way into the river mouth and got our anchor down in the calm waters of the river that so terrorized those building the canal back at the turn of the century.

We awoke to howler monkey calls in the early morning and soon afterward followed large flocks of parrots as they criss-crossed the river over our heads. We took the boat as far as the river would allow in order to cast respectful eyes on the dam that created Lake Gatun. At night, with powerful flashlights, we could see the iridescent eyes of crocodiles swimming along the river banks.

On July 1, we got an early start out of Rio Chagres, setting anchor by 19:00 off Cayos Chichime in the San Blas Archipelago. The San Blas Islands are technically part of Panama, but they are wholly owned, occupied, and governed by the Kuna (or Guna) Indians of Panama. Panamanian law doesn’t apply in the San Blas. Permission to visit the villages is granted by the village officials (for a small fee, of course). It’s subsistence living with farming on the mainland portion of the Kuna nation and fishing in the waters of the San Blas. Villagers sell their carvings and “Molas,” scraps of fabric sewn together by hand to make elaborate patterns or symbols like fish and trees. Dug-out canoes selling vegetables, fruits, fish and lobster are ubiquitous. It was not unusual to fend off several canoes at once – all selling the same products. The Indians are short in stature but enterprising, taking full advantage of the relatively wealthy visiting yachts. About half of the many, many islands have one or more families living on them. Coconuts, all coconuts (even those on the ground or in the sea), belong to someone so it is strictly illegal to take a coconut without permission from its owner. Copra is the chief product, exported to Colombia, on Panama’s southern border.
John and Zach flew home from Panama City (following a lengthy taxi ride with our favorite taxista: Rogelio. Their return trips were not without difficulty. John left his passport on the boat and only discovered the oversight at the airport. He rented a car to return to the boat in Porto Lindo and caught the next day’s flight. Zach’s flight was delayed to the point that he missed his connecting flight and had to spend an uncomfortable night in the closed Dallas airport. Grrrr.

Cindy and I spent an additional couple of weeks in the San Blas, visiting numerous islands, villages, and river estuaries in search of wildlife. We bought some molas from Lisa, well known for her sewing skills. Lisa took us on a hike up to a waterfall on the mainland. We stopped at her village cemetery to visit her parents and then went on a jungle hike. We went down the river on the way back.. jumping off rocks, floating down the rapids and walking the shallows. Heaps of fun!
As our Panama visit was centered on the Isthmus’s wet season, electrical storms were frequent and intense. On more than one occasion, we felt like the bull’s eye of the passing squalls. Thunder and lightning were simultaneous. The further we travelled eastward toward the Colombian border the more intense the electrical activity became… or so it seemed.

So, on July 17, with anchor secure on the bow, Pazzo pointed north for a 24-hour sail to the beautiful, historical, and interesting city of Cartagena, Colombia. 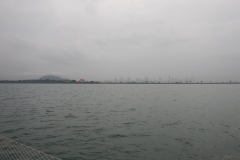 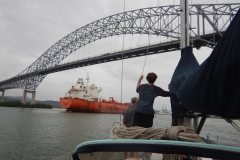 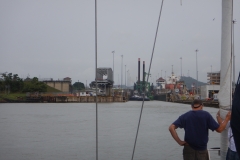 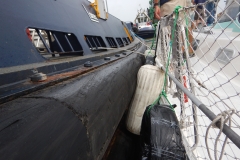 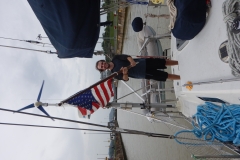 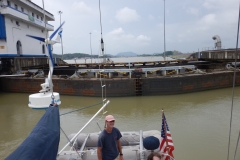 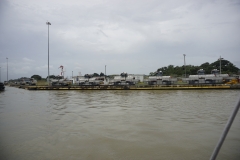 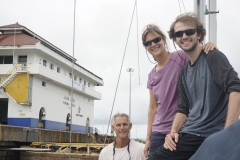 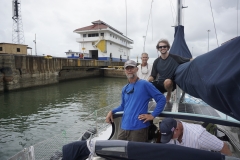 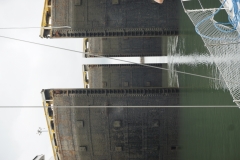 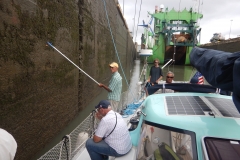 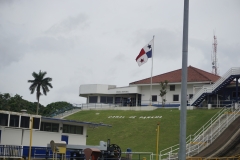 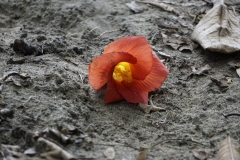 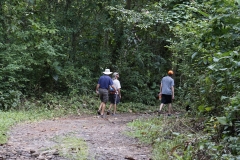 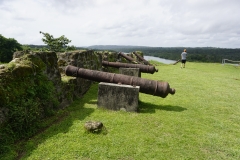 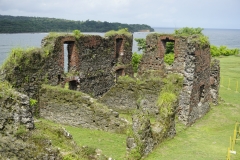 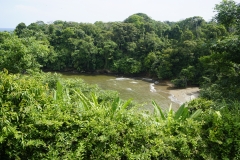 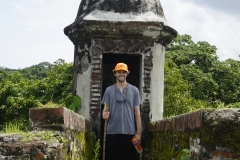 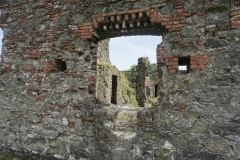 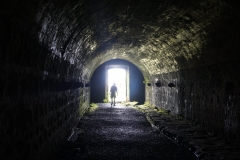