After sending Cindy and crew mate Jeff Mills home for their respective Thanksgivings and enjoying our Thanksgiving feast with Charlie and Nancy Hale from Portland, Oregon, John and I up-anchored at 10pm on November 23. Course: NW to Cien Fuegos, Cuba.

Before setting out for Cuba, we spent hours online researching regulations related to Americans and American yachts visiting Cuba. We determined that President Obama lifted many or the restrictions that have been in place since the Kennedy administration, but that President Trump undid Obama’s easing policy… almost. Since Congress hadn’t ratified Trump’s undoing, Obama’s policies were still in effect. However, it still wasn’t clear about restrictions on yachts. At the end of the day, it seems like restrictions apply to US flagged yachts sailing directly between the US and Cuba. American Yachts entering Cuba from foreign countries and not intending to return to the states within 6 months appear to be exempt from restrictions. We did not confirm this with any authorities. For Americans wishing to visit Cuba, the US automatically grants licenses to US citizens who fall into one of 12 purpose categories including, education, humanitarian projects, people-to-people, etc. Team Pazzo, loaded with supplies for delivery to hurricane Irma victims on the north shore of Cuba qualified as a humanitarian project.

Our 48 hour passage to Cien Fuegos, in the middle of the south shore of Cuba was uneventful, sailing about 60% of the time and motoring the balance. Several squalls, but no fish ☹. Cien Fuegos is a very large bay, completely land-locked except for a single narrow, winding channel between moderately tall cliffs. The channel is very well marked and carries a depth of over 65 feet well into the bay. When approaching Cuba, vessels are required to announce their arrival when 12 miles off shore. It’s a goofy requirement since most “Guarda Frontera” stations don’t have radios and those that do have only handheld devices with range of only 3 or 4 miles. Nevertheless, we began hailing at 12 miles and finally made contact with Cien Fuegos harbor control at 3 miles out. We were instructed to proceed directly to Marina Marlin, a few miles up harbor from the entrance. We came alongside the marina’s massive concrete dock at 22:30 on a Saturday night, expecting that the authorities would clear us in the following morning. Nope, Quarantine (doctor), immigration, customs, and the marina manager all wanted to check our papers out of Montego Bay, ask us (repeatedly) the same silly questions (like how tall is your mast, how many GPS do we have aboad, etc.), and drink our beer. After all, it is Saturday night! In Cien Fuegos, the authorities are on duty 24-7. While we’d have preferred to anchor off the marina, coming ashore by dinghy, the marina manager explained that they’d had a dinghy theft a year ago so now all yachts are required to berth at the decrepit marina damaged by Hurricane Ike in 2008… and never repaired. We were aghast at the electrical connections in the marina manager’s 1960s vintage office: twisted pairs of wires with electrical tape keeping the lights on. Shocking… literally. So, for $50USD, we spent a calm night laying alongside the massive finger pier, worrying about a rat infestation.

The following morning, we wandered a mile or two to find the town alive with the Sunday morning social crowd. Lots of church services in progress, but few smiles. Grocery stores, with their limited selection, were easily identified with their sizable queues of Cubans waiting their turn to shop. Vintage American cars from the 1950s and 60s were in abundance, albeit significantly altered over the years with components from various other makes and models.

From Cien Fuegos, we made our way east to the small coastal village of Cassilda and Trinidad (inland), Cuba’s oldest city. Getting cash in Cuba is a challenge because of the strained relations with America. American debit cards don’t work in Cuban ATMs. Our Maestro Debit Card from our Dutch bank account was reported to work, but we later determined that Maestro works only in Havana. So, we suffered the long queues at the bank to exchange USD for CUC (Cuban Pesos)… with a 10% additional surcharge that applies only to USD. Ooof. For lunch in Trinidad, we ordered typical Cuban fare of chicken, rice, and beans. We had our choice of warm or cold beer. We chose cold and soon noted the waiter taking two beers from his fridge and sending them across the street with his buddy to (presumably) exchange for cervezas frias (cold).

For the next week, we sailed in, out, and around the Archipelago Jardines de la Riena, the queen’s garden, a long string of mangrove cayos, surrounded not by reefs, but by sandbars. Wind was typically NNE 20 knots. We kayaked around a few mangrove cayos and tried snorkeling in several spots, but were uniformly disappointed. Fish just don’t hang out around sandy mangrove islets. A highlight was a brief visit by a local fish boat, a low-freeboard and leaky rig with 4 tired fishermen. They wanted to trade lobster for a weather report. Until the wind eased, they had no chance to motor home against the wind and waves. Unfortunately, the weather forecast called for continued brisk northerlies. As they loaded a dozen lobster aboard Pazzo, we gathered a care package of beer, soap for the wives, candy, and Jeff’s left-over whiskey. They powered away disappointed with the weather prediction, but happy with their trade. What would we do with a dozen fresh lobster and no BBQ?

On December 3, we pulled the plug on the Jardines de la Reina, making our way SE to Cabo Cruz, the southernmost point of Cuba. The village of Cabo Cruz is a delightful little village with many residents living here their entire lives, fishing, farming, and distancing themselves from the politics of Cuba. After we got our anchor down in the quiet harbor, the Guarda came rowing out in a dilapidated row boat. They were grateful for a tow back to their small dock. John tried to give away a bunch of surplus medications, but the village doctor couldn’t accept open medications. We took a care package of soap, toothpaste, and feminine napkins ashore for a villager who took time to show us around. Lobster nasi-goring for dinner after a quick but very rewarding snorkel on the fringing reef – John found a lion-fish in the very clear water!

We made a couple more stops while beating our way east along the south coast. The procedure was the same with each stop: anchor and wait for the Guarda Frontera to come check our paperwork and give us permission to go ashore. It is absolutely forbidden to go ashore without permission. The regime is terrified that Cubans, especially educated or otherwise talented Cubans, will try to escape on visiting yachts. Unfortunately, on a couple of our stops, the Guarda never showed up to check our papers. OK, no beer or lobster spaghetti for them!

December 6 found us in Santiago de Cuba, Cuba’s second largest city. We spent a couple of days poking around the city, visiting a museum, and listening to Cuban propaganda radio. Not two minutes go by without mention of Fidel or the Revolution. Shocking when you remember that Fidel Castro has been dead for over two years and the Revolution was in the 1960s! We enjoyed celebrating a birthday with a local Cuban family who had befriended our Danish friends from “Johanna.” This was our only remotely intimate experience with Cubans. Pedro, the man of the house, spoke English and spoke out against the communist system. He bought and sold cigars, rum, and anything else “yachties” might need under the table and against communist law. It’s probably only a matter of time until the regime sends in an informer to expose Pedro’s illegal dealings with “yachties.“

Our plan was to sail east around Cabo Maisi, the eastern cape of Cuba and up the northeast coast of Cuba before heading for the Bahamas where we’d leave Pazzo for the Christmas holidays. Sadly, Cindy called from Portland on December 7 to alert us that Julie was deteriorating more quickly than expected. She may not make it until December 20, our planned return date. So, we made a last minute change to our itinerary: rather than clearing out to Baracoa ahead of an approaching cold front, we secured clearance to sail to the Turks and Caicos Islands were Cindy had identified a secure marina with space available for Pazzo.

So, at 0700 on December 8, we hauled anchor and quietly motored out of Santiago de Cuba. We crossed paths with a ferry boat loaded with Cubans on their way to work in the early morning light. With stars and stripes floating astern, I patted my chest and then pointed to the ferry passengers with both outstretched arms. To my surprise and delight, nearly the entire boat responded similarly…. and smiled some of the only smiles we’d found in this poor country. 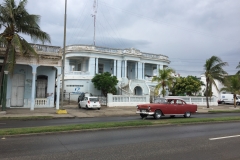 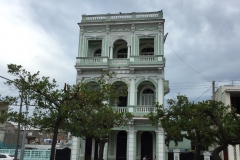 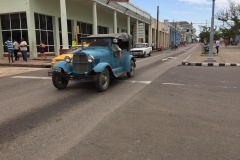 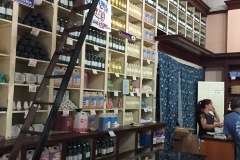 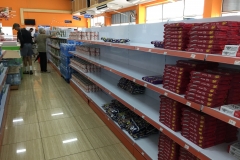 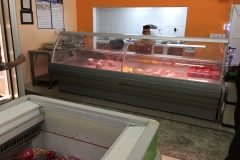 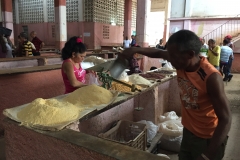 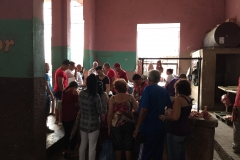 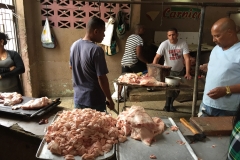 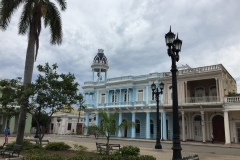 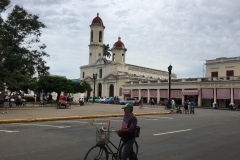 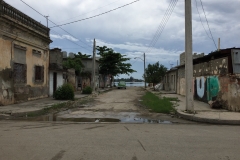 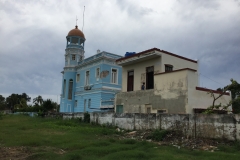 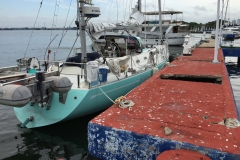 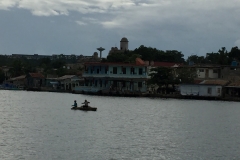 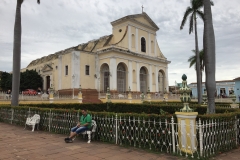 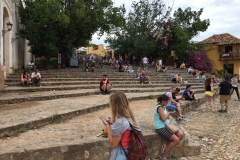 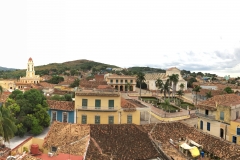 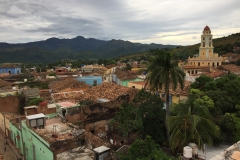