Fortunately, the US Virgins are only 20 miles from Vieques and the British Virgin Islands (BVI) are only dozen miles further east. We had the additional good luck that the easterly trade winds were not blowing full force during our two week visit to these beautiful islands.

After leaving Colombia, we encountered only a hand full of other cruising boats in each of the countries and ports we visited. We were warned the “yacht density” would pick up considerably in the Virgin Islands. The forewarning was fair. We found “no room at the Inn” in the first two anchorages we planned on, just outside of the capital city of Charlotte Amalie on the Island of St. Thomas. Anchorages throughout the Virgins are crowded during the winter cruising season. We assume there is plenty of space available during the hurricane season.

Kyra, Cindy (Cinderblock), Maria (Marbles), and Helena (Hell) joined (my) Cindy, Chloe, and me at the Grand Haven Marina. Actually, we anchored near the marina and took advantage of their very nice and free dinghy dock to collect the girls. The marina wanted $4.00 USD per foot per night – that works out to about $200USD per night to tie to boat to a lovely concrete pier. YIKES – those are Corsica prices in the Med!

We didn’t waste much time in the port city before setting off to a quiet and un-crowded anchorage adjacent to the airport where Chloe would fly out the next day. Once Chloe was in the air, we hoisted anchor and set sail along the south coast of St. Thomas, bound for St. Johns, the second largest of the USVI. We had a lovely sail before dropping the hook in Caneel Bay, St. John’s Island.

March 18 was a busy day for Team Pazzo. We were underway by 0815 en route to Francis Bay, just around the corner from our overnight mooring. After breakfast, we set out on a hike across the isthmus to Watermelon bay were we enjoyed a self-guided tour of the Annaburg Sugar Mill ruins. The mill was sited on the hill above Watermelon Bay in order to harness both gravity and wind power. The cane fields were situated in the hills above and surrounding the mill so the slave and paid workers could transport the raw cane downhill to the mill. Subsequently, the finished products (sugar, molasses, and rum) made their way further downhill to the cargo holds of awaiting ships. In addition, the hill site was ideal for a windmill to supply power for crushing and squeezing the cane. After lunch, we sailed north to Great Bay on the island of Jost Van Dyke in the British Virgin Islands (BVI). After clearing in to a new country (immigration, customs, and port captain), we moved the boat around the corner to White Bay where the girls were looking forward to drinking at the Soggy Dollar Beach Bar. The girls bought us our first Painkiller, a drink that originated at the Soggy Dollar. Yum!
The next day, we moved the boat along the north shore of Tortola Island, stopping at Sandy Cay for snorkeling and eventually landing at Marina Cay at the east end of Tortola. This was our first sobering glimpse of Irma’s destruction. The shores all around Marina Cay were littered with wrecked yachts. A beautiful and large resort on Scrub Island was marginally operating with only the restaurant, bar, a few rooms, and one villa in service. Most of their rooms were occupied by insurance adjusters and hedge fund managers on island to survey what is left of their investments. Willy tried harvesting a few lobsters from a nearby reef, but managed only to get his hand tangled up with a black spiny sea urchin. Locals advised soaking the hand several times a day in urine or vinegar. We chose vinegar ☺. Lime juice would have probably worked well too… and would have smelled better too.

March 20 was “Baths” day. On the southwest corner of Virgin Gorda is a beautiful jumble of huge, smooth boulders. The waves wrap around the south tip of the island and flood and ebb a maze of pools and miniature sand beaches while the surf crashes on the outer-most boulders. We spent several hours playing in this veritable hide-and-seek paradise. The national park service provides day moorings for yachts (and dinghies) to park while visiting The Baths. By mid-afternoon, it was time to head back across the channel to Trellis Bay near Marina Cay on the east end of Tortola Island. We made a reservation for ribs at a quiet little beach purveryor, but they sold out of ribs before we came ashore at 18:30. Fortunately, Cindy saved the day. She turned ribs disappointment into spaghetti delight in about one short hour!

From Tortolla we headed back to Norman Island where we picked up a mooring at Pelican Cay and The Indians, a rocky formation offering some of the best snorkeling we’ve found in the Caribbean. We found interesting rock formations and myriad fishes of all colors and sizes. From Pelican Cay, we motored about 30 minutes to pick up a mooring at “The Caves,” another favorite snorkeling spot where we explored underwater caves with our waterproof flashlight. The large barracuda hanging out in one of the caves was definitely unnerving. Maybe time to poke around a different cave?

After a handful of fun-filled days exploring in the BVI, it was time to head back to St. Thomas to see the girls off for their final term at UW. We enjoyed a great sail back to Charlotte Amalie, stopping at Soper’s Hole to clear out of the BVI and arriving at the anchorage off the Grande Haven Marina early afternoon. Then another adventure… Turns out that the US Homeland Security folks at the Grande Haven Marina won’t check in arriving yachts without an appointment. So, the very nice ladies, twiddling their thumbs, directed us downtown to the ferry terminal where their busy colleagues would be happy to help us. After completing formalities, Team Pazzo sat on the dock of the ferry terminal and ate mangoes like they were apples – super yummy and a suitable reward for suffering the lazy ladies at the Grand Haven Marina homeland security desk.

March 24 found Pazzo east-bound again, this time at a leisurely pace with only Cindy and me aboard. We enjoyed a couple of restful days at Christmas Cove, where we watched some of the St. Thomas International Regatta in progress, and Reef Bay, where we hiked to the Reef Bay Sugar mill ruins and to the top of St. John’s island to take in the views overlooking Francis Bay.

Bidding farewell to the USVI, we crossed the channel to Tortolla Island where we checked back into the BVI and assessed the terrible toll that Hurricane Irma took on the fleet of charter yachts “hiding” in Road Harbor. Boats and docks piled on top of each, catamarans flipped, and masts a-plenty protruding from the tranquil waters of the marinas and anchorages. Very sad! After a few hours in Road Town, we moved on to Salt Island where we snorkeled the wreck of the HMS Rhone, another hurricane casualty from 1907. From Salt and Cooper Islands, we headed back to “The Baths” for another visit to this wondrous playground. This time, a notable north swell had set in and the local authorities had closed the beach to swimmers. Fortunately, the enforcement boat was off station when we arrived so we swam ashore anyway ☺.

Following our brief visit to “The Baths,” we sailed north and into North Sound, home of the famous Bitter End Yacht Club – or not. Sadly, Hurricane Irma had her way. We picked up a mooring in Biras Creek for a short dinghy trip to the pile of splinters and debris that appears to mark the Bitter End of this iconic club. After a couple of days in North Sound, we check out at Spanish Town (down Island a bit), rested a few hours in the lee of Ginger Island and set sail for the 12-hour, uneventful, dash to the French/Dutch island of St. Martin / Sint Maarten. 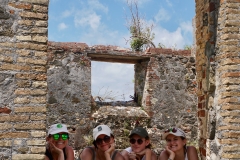 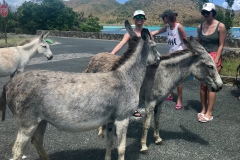 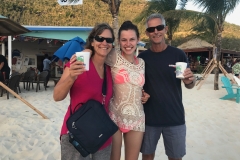 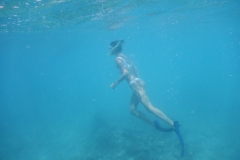 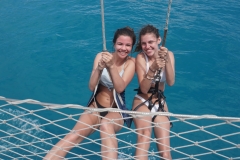 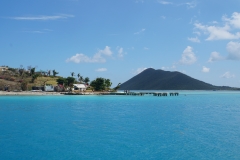 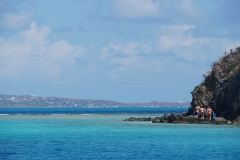 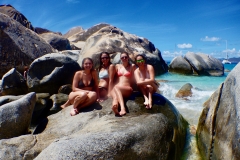 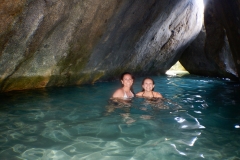 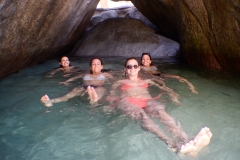 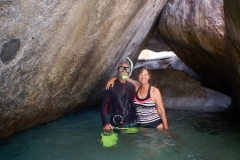 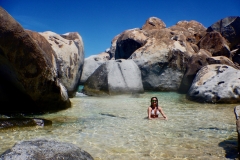 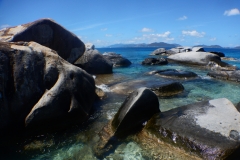 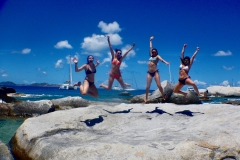 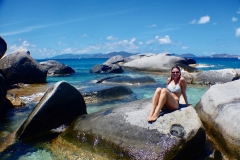 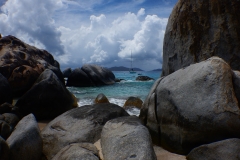 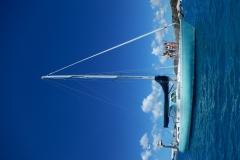